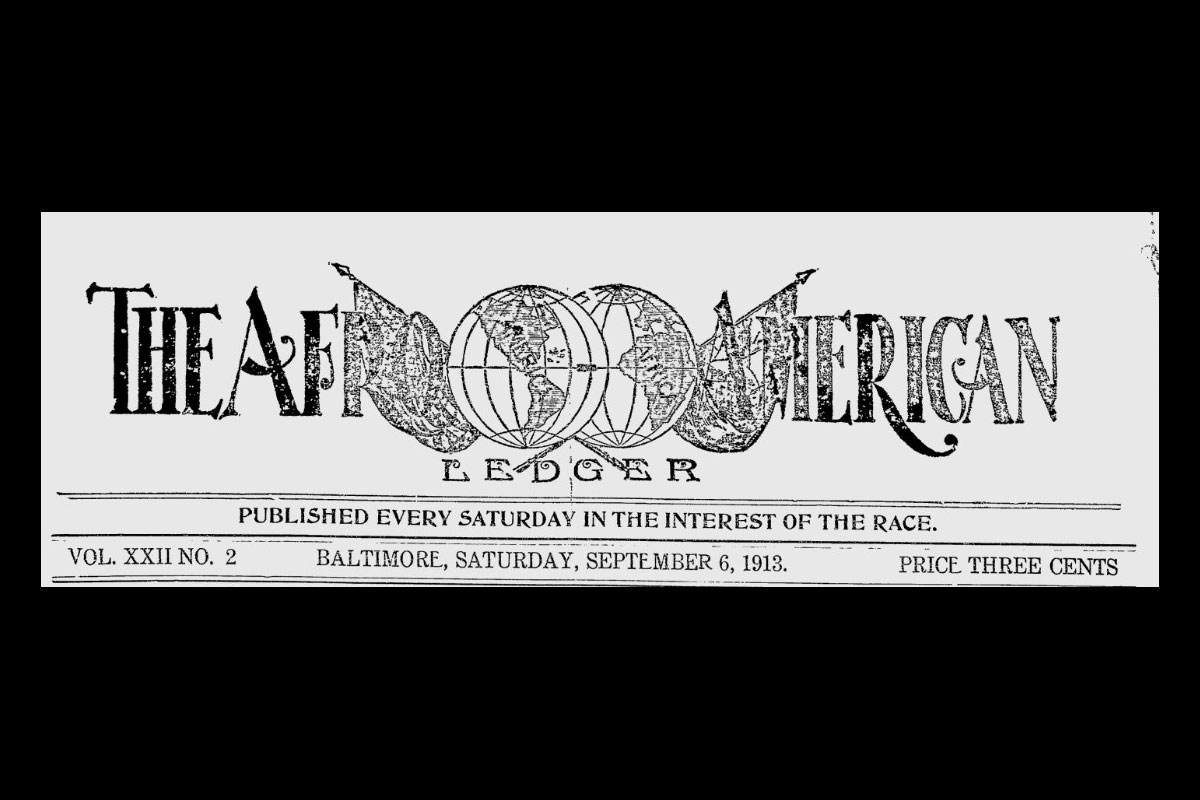 When John H. Murphy founded The Afro-American newspaper in 1892, his goal was to combine three separate church publications into a single-page newsletter. Murphy was both a former slave and a Civil War veteran, and in the Reconstruction era, The Afro-American served to inform and unite his Maryland community. Little did he know, it would become America’s oldest running black newspaper. By Murphy’s death in 1922, the newspaper had grown to cover most of the Atlantic coast and expanded to thirteen regional editions.

At its heart, The Afro-American (now simply Afro-American, or colloquially, Afro) was a mouthpiece for black America. It documented everyday life in black neighborhoods that the mainstream white media didn’t cover. Wedding and funeral announcements, neighborhood restoration projects, feats of black artists and athletes, and local community events could all be found in an issue of the Afro-American. The editorial section argued against Jim Crow machinations, discussed black labor rights, and highlighted education advocacy. The newspaper also gave a voice to aspiring black journalists, like Murphy’s own daughter Elizabeth Murphy Phillips Moss, who became America’s first black female reporter.

Murphy’s children continued the Afro-American’s important work. Fourth generation relatives John J. Oliver, Jr. and Frances M. Draper manage the paper today. It’s been a cornerstone in representing black journalistic voices in their own words and social groups. Media of the time tended to focus only on exceptional members of the black communities. Unless a black person was a celebrity of national renown, they were unlikely to catch the attention of mainstream news publications. The Afro-American was a way for a black child in Baltimore to pick up a newspaper and see stories of citizens and communities that looked like them.

There was a whole culture, a whole way of life that was ignored by American society. It didn’t exist but in the black press.”—Asantewa Boakyewa, an administrator in the Center for Africana Studies, Unboxing History

An institution as large and old as the Afro-American is bound to have a lot of source material stored, but the reality is almost beyond imagination. In 1923 the newspaper’s staff began actively storing every document, photograph, and letter used in the publication.

One approach to digital preservation is to focus solely on material with the highest research and revenue value. This would, in theory, limit the scope of the project to photographs of famous newsmakers and the articles with the most recognizable headlines.

However, such an approach would fly in the face of the Afro-American’s mission. From its inception, the newspaper held the lives and experiences of everyday citizens in high importance. A digital representation of the Afro-American wouldn’t be complete without advertisements, local births and deaths, letters from around town, and images of black people who aren’t already found in the historical canon. Everything was important to the Afro-American, and everything would need to be digitally preserved in order to keep the paper’s rounded picture of its time and community.

Nearly seventy years of bound broadsheets live in the Afro-American’s archives, which takes up seven rooms of the newspaper’s headquarters. Four of those rooms boast floor-to-ceiling shelves of hundreds of archival boxes, containing over 150,000 labeled envelopes stuffed with artifacts. File cabinets encase folders of photographs, each carefully annotated on onion skin pasted to the back of each photo. With no way to find a needed source easily, indexing would require digitization.

Digitizing a collection of this size and composition would prove the Afro-American’s biggest challenge.

Materials that old and delicate (like the onion skin annotations) need to be handled carefully, and the variety of media types meant that care and cost would be required in the effort. Manual digitization wouldn’t be as simple as feeding documents through a scanner. Sorting, categorizing, and deciding on metadata factors for the digital end product requires intense planning—something that’s much harder to do when a collection fills seven entire rooms.

Enter Thomas Smith, a graduate student and young programmer, and his invention, Project Gado. In 2010, Smith worked with the Afro-American to win grant funding for digitization, but even with money, the effort faced a daunting task.

The archives of the Afro-American contained 1.5 million historical photos. When approaching the project, Smith took stock of the collection. In his Medium article about the project, Smith writes, “The standard approach to scanning a commercial archive is to focus on the most valuable 1% to 2% of the collection. Almost invariably, this means capturing images that cover famous people and major events. The everyday, being less profitable, is left out.”

Smith’s vision? Use brand new technology to digitize everything.

He built Project Gado, a scanning robot which, by Smith’s estimation, would shrink scanning time and man hours. Gado works through Python and Arduino coding languages and operates by lightly suctioning photographs and placing them, one by one, on a scanner. Supervised by a human, the robot was able to scan about 120,000 images in the first year.

A virtual folder of raw image files is just as useful for research or revenue as a folder of photographs, but it can offer superior search capabilities when set up properly. This can save significant time and resources that can be allocated to more important tasks than sifting through boxes.

In order to make the Afro-American’s newly-digitized image collection searchable and sellable, Smith and the digitization team knew they would need to employ metadata. Adding information by hand was one option, but being a technical expert, Smith wanted to try powerful AI tools. In 2010-2012, this kind of technology was still in its earliest days when applied to visual media, so Smith’s team started building what they needed from scratch.

For the text, though, a major tool was Google Vision’s OCR. This tool detects when text appears in a document and then attempts to read it. This is an impressive tool, but has significant limits that can only be mitigated by detailed, human review. Check out the results in the Afro-American Archives.

AI tools created by IBM and trained by Smith’s team were also useful in identifying themes, content, and historical figures. Where the AI fell short was around gender and age. Even in today’s AI, facial recognition is largely ineffective when presented with people of color.

All that time and effort resulted in a product that could be sold to media marketplaces, like Getty Images. Now, licensing these powerful images helps fund the Afro-American’s reporting. These tools also helped move the field of preservation forward and displays just how useful deep learning and AI can be to the future of digitization.

The Impact of Everyday History

Smith pinpoints the incredible impact digitizing everyday black history creates. “That experience—that personal moment of interacting with the past—is a unique engagement with history that the archive offers.” This connection between the modern, everyday person and their counterpart in the past only comes when attention is paid not only to famous figures, but faces in the background. “Digitizing a whole archive (or at least a massive sample of it) affords the opportunity to capture both the iconic, highly profitable images and those that document daily experience,” says Smith.

Today, this wide-spread preservation of all perspectives and identities throughout history is more feasible than even ten years ago when the efforts to digitize the Afro-American began. According to Smith, “Modern scanning tech like the… overhead camera can scan hundreds of images per hour, and sheet-feed scanners today can scan delicate materials without damaging them. For institutions that can afford the tech, there’s no excuse not to digitize everything.”

Digitization of the Afro-American’s archives is ongoing, and presentation of its contents remains in flux, but organizations seeking similar results now have an amazing success story to look to for inspiration.

History’s raw materials, like fossils, are embedded in layers of time. Consider a drawer in your office desk or a hall bureau at home: Its jumbled contents form a visual collage of your recent past. History gets written when somebody sifts through the remains and ponders how all the pieces fit together.”—Bret McCabe, Unboxing History

Our histories, our cultures, and what makes us one human community—these concepts are more than items displayed in museums or on library shelves. Our stories wouldn’t be complete without the everyday lives of the community. The Afro-American’s massive historical collection of journalistic ephemera illustrates a rich history of a side of American life that is often missing from narratives.

Seemingly-ordinary collections are often the truest pictures of history. This ideology is part of Anderson Archival’s mission, just as it powers Project Gado and lives on in the Afro-American’s archives. If you’re ready to make sure that your collection is available for future generations and even for profit-earning, reach out to us today.

PrevPrevious“More to Be Told”: Finding the Right Fit for Your Private Collection
NextHappy Thanksgiving 2020Next
Let's Talk!